was formed in Athens in 1994 from a team of young musicians, with the purpose of performing and studying the repertoire of songs and music, coming from the tradition of Asia Minor and of the Estudiantes of Smyrna and Constantinople, as well as songs from the rebetiko school of Piraeus.
History

One of their aspirations is to create an atmosphere and aesthetic, which refers to ways of entertainment of a past era, the era in which the abovementioned music bloomed. A time characherized by the love for music, the eagerness to excell and the authenticity of people.

In the 17 years in which they serve and promote rebetiko songs and songs from Smyrna, they have performed, as a band, in many places. Some of them include “Klimataria”, “Berdes”, “Enallax”, etc. During 2001-2002, they performed at “Kottarou”, one of the most historic “koutouki” (places where people eat and listen to greek traditional music) of Athens. From 2002 to 2006 they played their music at “Deipnosofistes” and “Poinologio”. In the winter of 2007 they played every Wednesday with Yannis Lempesis at “Karavani”, during the period 2007-2008, 2008-2009 we find them at “Galazia Fiali”, in 2009-2010 they appear every Tuesday evening at Tzivaeri, while this last winter they have had a constant presence at “Thousand and Two Nights” in Psirri. 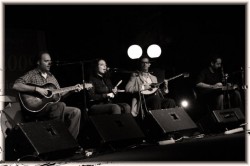 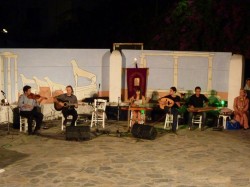 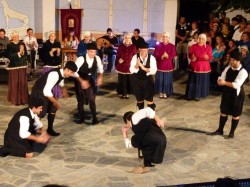