Since its founding in 2002, the Ljubljana-based ensemble MD7 (Musica Danubiana 7) has been engaging their ever-growing audiences in performances of new music composed especially for them.
History

Comprising a unique combination of instruments, the septet has commissioned, premiered and given repeat performances of more than 40 new works from composers all over the globe. Invitations to perform followed immediately after their first concert, and the group has subsequently performed to great acclaim at concerts and music festivals in Vienna (2001), Trieste (2003, 2006, 2008), Bucharest (2004, 2008), Innsbruck (2007), Dublin (2008), Seoul (2010) and Ljubljana. MD7 has been equally active in the studio, having recorded two compact discs for the in-house label of RTV Slovenia.

The ensemble has operated under the artistic guidance of Pavel Mihelčič since their formation. The seven permanent members of the ensemble are all highly-skilled instrumentalists and principal players in Slovenia's top orchestras: Matej Zupan, flutes; Jože Kotar, clarinets; Miha Šuler, trombone; Franci Krevh, percussion; KatjaKrajnik, viola; Igor Mitrović, cello; and Luca Ferrini, keyboard instruments. The conductor of the ensemble is Steven Loy. 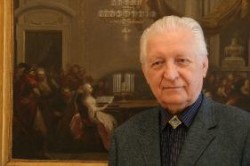