The Warsaw Cellonet Group was founded in 2007 and consists of young Polish cellists - talented soloists and laureates of international competitions (including the Witold Lutoslawski International Cello Competition). The ensemble is directed by Andrzej Bauer.
History

The artists of Cellonet often combine early and contemporary music in their concert programmes. Apart from arrangements of motets of Gesualdo da Venosa one may hear the premiere performances of new works commissioned by the ensemble, such as compositions of Wojciech Ziemowit Zych and Zaid Jabri presented at the 57. International Festival of Contemporary Music “Warsaw Autumn”. The group has also collaborated with jazz and pop music artists - singer Anna Maria Jopek, pianists Leszek Możdżer, Marcin Masecki, and others. Cellonet has been invited to perform at several festivals, including the International Festival of Polish Contemporary Music “Musica Polonica Nova” in Wrocław, Festival of World Premieres in Katowice, “Warsaw Autumn”, “Codes” Festival in Lublin, as well as at the Enter Music Festival in Poznań and Artus Jazz Festival in Toruń together with Leszek Możdżer. The group has also made appearances on stage abroad at the “Contrasts” Festival in Lviv and in the Royal Festival Hall in London at the Woven Words concert series organized during the Witold Lutosławski Year. The cellists’ concerts at the Royal Castle in Warsaw served as opening events of many editions of the Witold Lutosławski International Cello Competition. Cellonet’s projects created with Polish and Ukrainian composers were supported by the Polish Ministry of Culture and National Heritage and subsequently led to performances in both countries. The recording of Agata Zubel’s work for cello quartet released on composer’s album Cascando and performed by the members of Cellonet received the “Fryderyk” Award (2010) in the category “Best Album - Contemporary Music”. 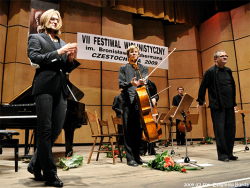